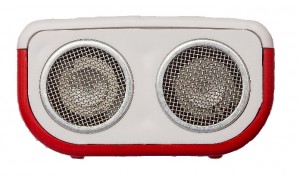 AUSION is an innovative electronic mobility and travel aid for the visually impaired. Based on the principle of echolocation, AUSION enables people with severe visual disabilities to move around indoors and outdoors with confidence and least assistance. Like bats, AUSION acquires information about the environment, especially objects and obstacles and translates them into sounds information that can be heard. The interpretations of these audible feedbacks enable the virtual recreation of the environment. AUSION is compact, handheld, maneuverable, non intrusive device. It helps AUSION detect overhanging obstacles at the chest, shoulder and head levels. This offers a greater freedom of movement to the user. 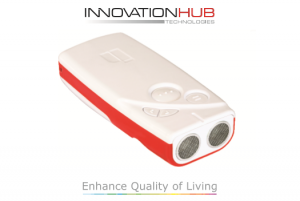 The AUSION is an electronic Mobility Aid for the visually impaired; it employs
ultrasonic sensors mounted in a handheld device to detect objects in the region immediately in front of the sensors, and produces sound patterns which convey information about those objects. The AUSION has been designed to provide as much information as possible about the environment in front of the sensors to enable him/her to avoid obstacles.
The AUSION is built as a handheld device so that it can be scanned by natural hand movements, Up & Down or Left or Right. This enables AUSION user to direct attention to a particular feature which s/he may be passing, by bringing it into the line of “view” of the AUSION.
The AUSION does not give information about the surface texture of the objects which produce the echo signal. Another simplification is that the feedback is restricted to the nearest object to avoid any confusing signals to User.
AUSION cannot reliably detect downs or holes in the ground, and a primary aid such as the long cane should be used in conjunction with the AUSION to cope with this eventuality.

AUSION is developed as a part of our vision to Enhance Quality of Living for visually impaired by providing Mobility and Navigation solution. The current version of the AUSION is the result of several years of research and more than two years of development by the InnovationHub Technologies with simple objective of making it useful, simple and affordable to visually impaird.
The AUSION is a secondary mobility aid designed to be used indoors and outdoors in conjunction with either a cane or residual vision. It gives the user advanced warning of objects which lie within his or her travel path.
The AUSION has evolved with active support from NAB ( National Association for Blinds) Bangalore; Deepa Academy for Blinds, Bangalore. Mobility Trainers from NAB and actual blind users from NAB and Deepa Academy have provided their inputs at various stages of development. It is the product of a research program dedicated to achieving an understanding of mobility and the information requirements of the independent blind traveler. The AUSION embodies many of the findings of the interaction with large number of visually impaired; the emphasis is on achieving usefulness and simplicity. The feedback comprises the notes of a musical scale, which make a familiar tonal progression as the user approaches an object.
The AUSION is covered by patents. 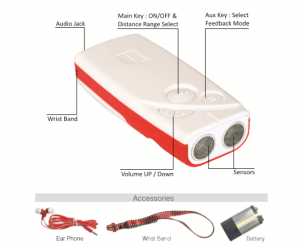 A transmitter in the front of the device radiates ultrasound (high frequency sound inaudible to the human ear) in front. When the ultrasound hits an obstruction such as a wall, a person or tree, it is reflected to the aid and received by receiver.
The receiver transforms the reflected signals into electrical signals. Device computes time taken to reach received signal and translate it in to distance to obstacle from device. This distance is translated into Audio notes to inform user of distance of obstacle
The appropriate note of the signal indicates the approximate distance of a reflecting object, being lowest at the maximum range of the aid and gradually increasing note by note as the object comes closer.
By interpreting the comparative notes of the signal the user is able to judge the direction (based on direction of Sensors) and distance of reflecting objects (based on „Note? frequency).
The AUSION has a beam which forms a cone of 300. Any object with in this cone area is detected by the AUSION. It needs some Down & Up movement to detect object at surface level or at chest or head level. Similarly some left/Right movement of AUSION will enable detection of objects at a vertical plane. 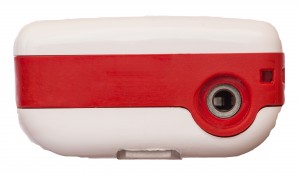 Understanding sound signal and correct interpretation will enhance effectiveness of AUSION. Due to the intricacy of the sound signals of the AUSION, User must go through formal training for proficiency in use of AUSION.
For adequate level of competence, 1 to 2 hours per day of practical tuition is recommended for a period of 2 – 3 weeks. If some revision of basic mobility techniques or primary aid skills is necessary, a longer period may be required. Even after satisfactory completion of the training, the process of learning the sounds of the AUSION usually continues for many months. 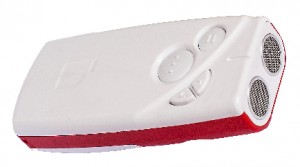 The AUSION is an effective aid to orientation and travel in most situations, both indoors and outdoors. In outdoor situations, however, it should be used in conjunction with a long cane unless the area of travel is both familiar and free from hazards at ground level which the AUSION may not detect.
The long cane user using the AUSION can avoid collision with objects above ground level such as sun-shelter, bus stops, branches and the trays of trucks, avoid embarrassing contact with pedestrians, follow shorelines at a more convenient distance. Changing environmental conditions such as those caused by road works can be easily recognized.
Whichever primary aid is used, the AUSION provides sufficient information in its signals to allow an experienced user to navigate smoothly around objects. He can tell not only the direction of an object, but also its approximate distance from him.
S/he can follow flow of pedestrian traffic in a business area to determine the most effective and safe travel speed for the situation. S/he can locate pedestrians to solicit help or ask directions or he may simply learn when someone is close to him or has departed after a brief conversation.
The AUSION can generally be used indoors without a primary aid unless there are known ground level hazards. In buildings with long corridors, the AUSION can be used for orientation, the location of doorways and other landmarks and the avoidance of hazards such as doors, wall mounted drinking fountains, fire extinguishers and chairs.
In large department stores it enables the user to move freely without accidental contact with other shoppers, display stands or counters, and locate exits.
Indoors the user can in time learn to recognize a wide range of objects such as doorways, projecting pillars, elevator entrances, pot plants. This knowledge used with the direction and distance information can allow a visually handicapped person to be more relaxed and effective in performing tasks either at work or in the home.